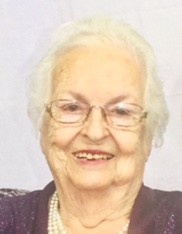 VERA JANE SMITH HOWELL, 90, of Piedmont, passed away Tuesday, February 18, 2020 at her residence surrounded by her loving family.  She was born on November 10, 1929 in Hickory NC to Emma and William Walter Smith, the sixth of eleven children.  Though life was hard in those days, she would talk of good times growing up.  Her job in the family was to work in the garden where she developed a love of yard work.  One of her last dreams was of her running in the woods trying to keep up with her brothers. Her hobbies included grandchildren, sewing, reading, quilting, game shows, crossword puzzles, baseball, watching ice skating, and gardening.  She got so much enjoyment watching the birds at her feeders all year long.  Her motto was Love, Love, Love.

Dansby Heritage Chapel is honored to serve the Howell Family.

To order memorial trees or send flowers to the family in memory of Vera Howell, please visit our flower store.