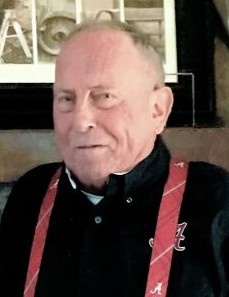 Mr. Fagan was the owner and operater of Fagan's Service Station for several years. He retired from Anniston Army Depot after 20 years. He was an avid fan of Alabama Football. He loved fish frys and cook outs with good friends and family. He loved being on his tractor and working on cars.

The family wants to send a special thank you to the Amedisys Home Health: Frankie Maddox, RN; Stacy Ewing; Shannon Hamm and Melissa Kane. Dr. K.J Shah and his staff. The Doctors and staff at Riverview Hospital. They would also like to thank the Doctors and staff of Alabama Cancer Care.

Mr. Fagan was preceeded in death by his parents, Frank and Vera Fagan; his son, Darrell Fagan; and his sister, Frankie Lou Fagan.

A funeral service will be held at Dansby Heritage Chapel on Sunday, March 24, 2019 at 2 PM. Visitation will occur one hour prior to the service. Burial will take place in Hanks Cemetery. Dr. Edward Blackwelder and Rev. Jerry Pike will officiate.

Dansby Heritage Chapel is honored to serve the Fagan Family.

To order memorial trees or send flowers to the family in memory of Ray Fagan, please visit our flower store.