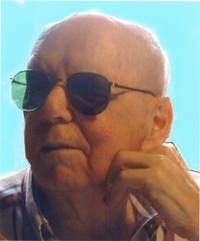 He was preceded in death by his parents; 4 brothers: Martin Stewart, Morgan Steward, Herbert  Stewart and Raymond Stewart; and 1 sister: Margie Langston Mitchell.

Funeral Services will be held Wednesday, September 4, 2013 at 3:00 p.m. from Dansby Heritage Chapel with visitation from 1-3 p.m. Burial, with military honors, will follow in Piedmont Memory Garden.  In lieu of flowers, the family requests memorials to either the Piedmont Rescue Squad or the Piedmont Disabled American Veterans Chapter 21.

Ollie was inducted into the Army November 23, 1943 at Ft. McClellan, AL and attended training at Camp Craft, SC.   He was shipped to St. Lo France where he was severely wounded in action on July 31, 1944.  He was hospitalized for 3 months, retrained for one month and sent to Germany November 16, 1944.  He was moved to the Belgium Bulge in support of pinered down troops and seriously wounded on Jan. 13, 1945. After being hospitalized 4 months, he went back to his old division and was discharged November 10, 1945. He was awarded the Combat Infantry Badge, Good Conduct Ribbon, ETO Ribbon with 4 battle stars, Bronze Star, Belgium Fouraguerre, Honorable Service Lapel Button WWII, Victory Medal, West Germany Clasp and 2 Purple Hearts with oak leaf clusters.  He was proud to serve his country in the 30 th Infantry Division, “Old Hickory”.

Dansby Heritage Chapel is honored to serve the Stewart Family.

To order memorial trees or send flowers to the family in memory of Ollie Stewart, please visit our flower store.