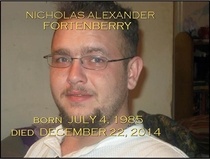 Nicholas Alexander "Nick" Fortenberry, 29, of Piedmont, passed away Monday, December 22, 2014. He was born on July 7, 1985 to Mark James and Pearl Elizabeth Flowers Fortenberry in Cartersville, GA.  He was known as a free spirit, often referring to himself as a 'New-Age Hippie' and was loved by everyone. He was of the Baptist Faith.
He is survived by his Father: Mark (Stephanie) Fortenberry; Mother: Pearl Blythe and fiance, Ronald Taylor; maternal grandparents: Myrtle Ruth and George Washington Flowers; brothers: Steven Fortenberry and fiance, Tiffany Holley, George Flowers and wife, Taylor, Zackary Davis, and Jeffrey Davis; and sisters: Shaine Fortenberry and fiance, Joshua Spicer, Samantha Davis and Mackenzie Davis.
He was preceded in death by his paternal grandparents: Troy Johnson Fortenberry and Mavis Lucille Leonard.
Funeral Services will be Saturday, Dec. 27, 2014 at 11:00 a.m. from Dansby Heritage Chapel with burial in Lindale Cemetery in Rome, GA. Visitation will be Friday, Dec. 26 from 6-8 PM at Dansby Heritage Chapel
Dansby Heritage Chapel is honored to serve the Fortenberry Family.
To order memorial trees or send flowers to the family in memory of Nicholas "Nick" Fortenberry, please visit our flower store.