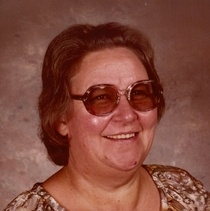 Funeral Services  for Mrs.  Louise Hulsey Hanvey, 82, of Piedmont, will be Tuesday, March 1, 2016 at 1 PM from Dansby Heritage Chapel with Rev. Michael Anderson officiating.  Visitation will be from 12 - 1 PM on Tuesday.  Burial will follow in Highland Cemetery.
Mrs. Hanvey passed away Sunday, February 28 at NE AL Regional Medical Center in Anniston.  She was preceded in death by her husband, Jack Hanvey, and daughter, Marie Williams.
She is survived by one son: Jeff Hanvey and his wife, Treva; half brother: Ronnie Hulsey; grandchildren:
Brad (Andrea) Hanvey, Wesley Williams and Christie Long; and 4 great grandchildren.
In lieu of flowers, the family requests memorials to Piedmont Fire and Rescue or a favorite charity..
Dansby Heritage Chapel is honored to serve the Hanvey Family.
To order memorial trees or send flowers to the family in memory of Joyce Hanvey, please visit our flower store.