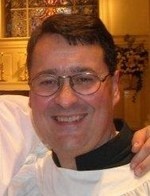 John Willis Brown, Jr., 51, an accomplished musician and performer from York, AL, passed away at his family home on Saturday, September 22, 2012. A memorial service celebrating John's life in the performing arts and his love of the classics will be held at First Presbyterian Church of Livingston, AL on Thursday, September 27, at 2:00 pm. Interment will follow at York City Cemetery.

John's music training began at an early age and his exceptional talent was evident not long thereafter. He was accepted to the Alabama School of Fine Arts where he continued to study organ performance, but soon discovered that he was also a gifted tenor. John made his professional operatic debut while studying at Birmingham (AL) Southern College.

For nearly 20 years, John performed in operatic and musical theatre productions, concerts and recitals across the country and in Europe. In 1995, however, John decided to leave his life on the road and return to his beloved hometown, where he shared his considerable musical experience with new generations of aspiring performers. John was Director of Worship Arts at First Presbyterian Church in Livingston, AL; pianist at Brewersville United Methodist Church; Cofounder and Music Director of Sumter Theatre Workshop; longtime board member at The Coleman Center for the Arts in York; a private instructor of piano and voice; and a frequent contributor to musical productions throughout the area.

John was preceded in death by his parents, J.W. and Sarah Brown, and his sister, Anne. Left to mourn his passing are sister Sandy McClung, niece Heather McClung, nephew Keith Brown, cousins Jennifer Rooney and Gordon Brown, Aunt Mary Armstrong Marine, along with friends, neighbors, choir members, students and fellow performers too numerous to name, as well as his constant companion, Biscuit.

In lieu of flowers, John preferred that donations be made to the Worship Arts Ministry at First Presbyterian Church, The Coleman Center for the Arts in York or your local animal rescue shelter.

Dansby Heritage Chapel is honored to serve John and his family.

To order memorial trees or send flowers to the family in memory of John Brown, Jr., please visit our flower store.