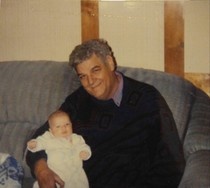 GERALD M. SMITH, age 68 of Piedmont (formerly of Gadsden) passed away on Friday, February 24, 2017, at Piedmont Healthcare Center. He was born on June 12, 1948, in Gadsden, AL to Charles Taylor and Thelma Herring Smith, who preceded him in death. Mr. Smith is survived by his sons, James Smith and his wife Stephanie of Piedmont, and Doug Smith and his wife Michelle of Oxford; grandchildren, Brittany Smith, Jessica Smith, Brandon Bullock, Felicia Hollis (Cain), and Kayle Smith; great-grandchildren, Jada Smith and Tanner Bullock; and brothers, Harold Smith of Gadsden, and Harlan Smith (Sandra) of Hartselle. A memorial service for Mr. Smith will be held at 11 a.m. on Sunday, February 26, 2017, at Dansby Heritage Chapel.
Dansby Heritage Chapel is honored to serve the Smith Family.

To order memorial trees or send flowers to the family in memory of Gerald Smith, please visit our flower store.